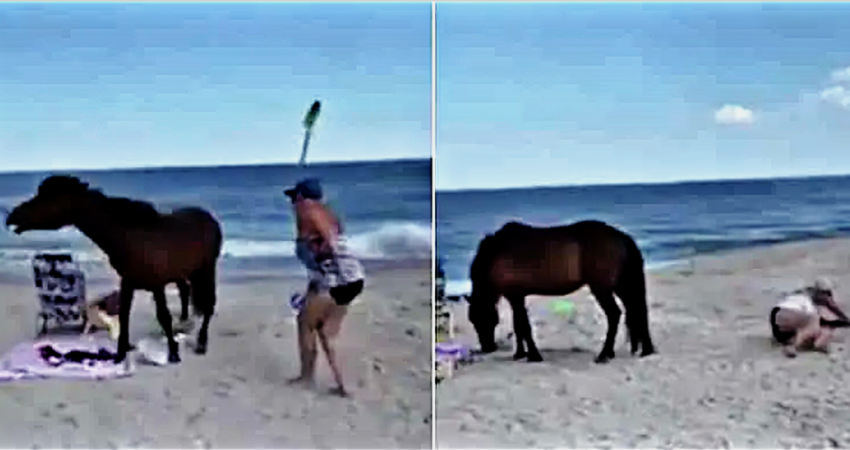 Although they are beautiful to view, wild horses should not be approached. Numerous people flock to the 37-mile-long island off the coasts of Maryland and Virginia each year to see the majestic wild horses that live there in the wild. This place is known as Assateague Island National Seashore. There are always people who break the regulations and endanger both themselves and the horses, though.

The People of the Ocean City Boardwalk Facebook page recently included a video of a woman hitting a wild horse with a shovel. A bay horse was captured on camera rummaging through the woman’s towel as she approached from behind holding a plastic spade. The horse replied by kicking out with both of its hind hooves as she continued to hit it with the shovel on the rump.

The horse picked up where it left off and the woman tumbled into the sand. As they joined the first horse, a second horse and a baby appeared to have discovered something intriguing on the towel. Visitors are expressly forbidden from approaching or touching the horses, according to signs. The woman, however, regained her balance and moved to approach the horses once more, shovel in hand.

They’re going to kick you, someone can be heard saying in the footage. The Assateague Island National Seashore Law Enforcement Rangers have received the footage from the National Park Service, who is aware of the occurrence. They do not know when the incident occurred, but they caution people not to bring food and to always keep their distance.

These horses have mastered the art of locating and obtaining food. They can stomp, bite, or kick open a food package, break open a locked cooler, or simply munch from unzipped beach bags. In search of food, the horses will launch a full-scale assault on the shore. Visitors should avoid this at all costs, according to NPS officials.

NPS requests that individuals observe from a distance for the protection of the horses and tourists. “The horses of Assateague are stunning, hardy, and untamed. They have mastered surviving in hostile conditions. Visitors and horses should avoid feeding and stroking the horses. Those who break the regulations are subject to penalties.

“Every year, people who approach too close to the wild horses are attacked by them, getting kicked, bit, and knocked to the ground. Wild horses lose their unique wildness when they are treated like domestic animals. Respect their family in order to protect yours. Give the horses the room they require to roam freely.”

With over 1.5 million views, the video of the woman slapping the wild horse has become popular. People are indignant by the woman’s actions. It’s the horses beach, we just visited, one person wrote. Don’t go if you don’t want to view the stunning horses. There are signs everywhere warning people not to touch horses, which is really disgusting.

It’s their beach, another person replied. The guest is you. There, we camp each year. It’s a lovely area. What are you doing there in the first place if you don’t like the horses? People like him make it difficult for others to enjoy the park, unfortunately! She needs to pay a fine. Have a look at the video for more, and let us know your thoughts.