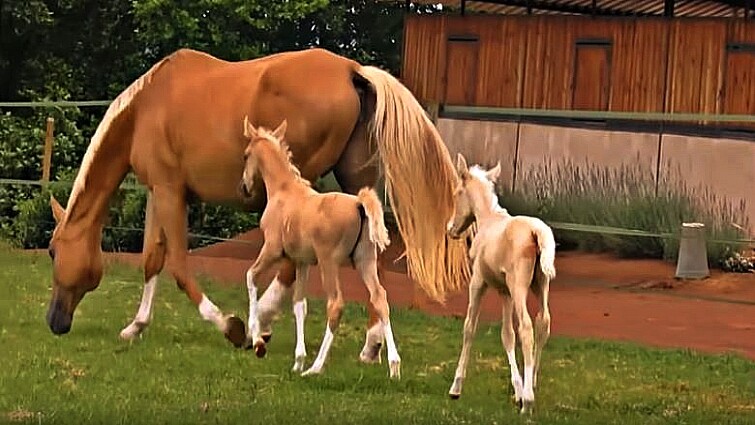 We are all aware that there is no greater love than the love between a mother and her children. Especially when the children are still very young and need their mother’s care and attention throughout the whole time. Daisy is a beautiful mare who has just given birth to two beautiful foals who are twins.

It is very difficult to take care of one foal let one having to take care of twins, who require a lot of work. The owners of this wonderful mare and her precious newborn little twins decided to take them out for the first time after staying in stables for more than 6 weeks.

They were not sure how Daisy was going to look after her two babies and they thought it was best if they stayed near to make sure that Daisy would not run away without them. The owners decided to name these amazing twins Don Quixote and Duet. As we can see in the video, Don Quixote stayed by Daisy’s side all along while Duet kept getting distracted and then would canter to catch up.

Due to this fact, the owners were watching very carefully that little Duet was not left behind. Daisy needed some time to adjust for two major reasons: It has been a long time since she last went out and most importantly before giving birth she never had to look after anyone while she was out. We must say that she is keeping up very well and that the three of them are having the time of their life.