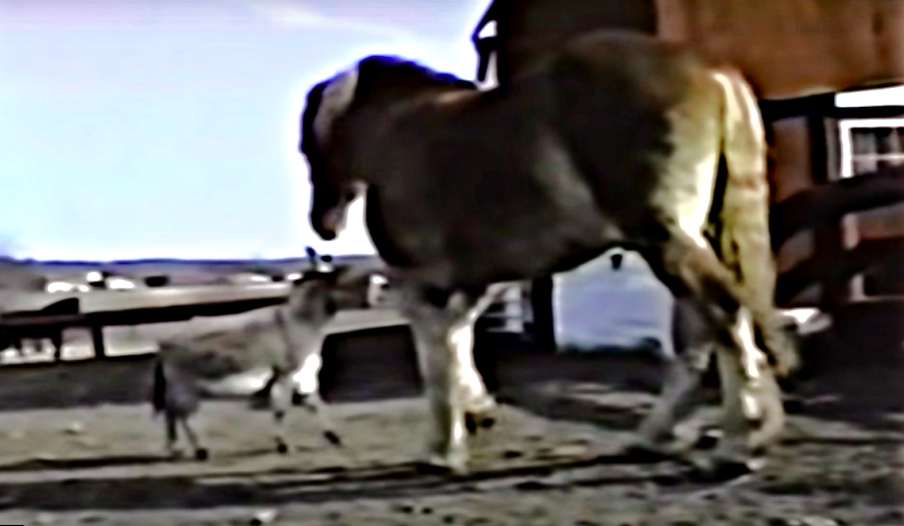 Today we are going to show a very hilarious video of a stubborn horse named Poncho who is yelling at a Huge Clydesdale horse named Gus. He looks like he is a little bit nervous and intimidated by the giant horse so he thinks the best way to mark his territory is to yell in front of him.

You would imagine that Poncho would at least be a little frightened if someone 10 times your size started walking toward you, but this brave donkey doesn’t seem to mind. Various cases have shown that donkeys can become companions of horses, but they are different from horses in many aspects, with particular health conditions and peculiar characteristics.

There are many components to analyze before determinating if a donkey is a proper companion option for your horse and situation.  Donkeys are amazing creatures for humans and other animals to spend time with. Donkeys are normally very kind and smart but some characteristics of their natural temperament, however, are commonly misinterpreted.

For example, they have different ways of reacting from that of horses. Rather than running away from predators, they naturally tend to stay on their ground and try to defend themselves by kicking with their front feet. Maybe this is the reason Poncho reacted this way towards Gus because he thought that Gus was a predator.

Enjoy the video below and feel free to leave your opinion on the comment section or even share it with your friends. We would really appreciate it!