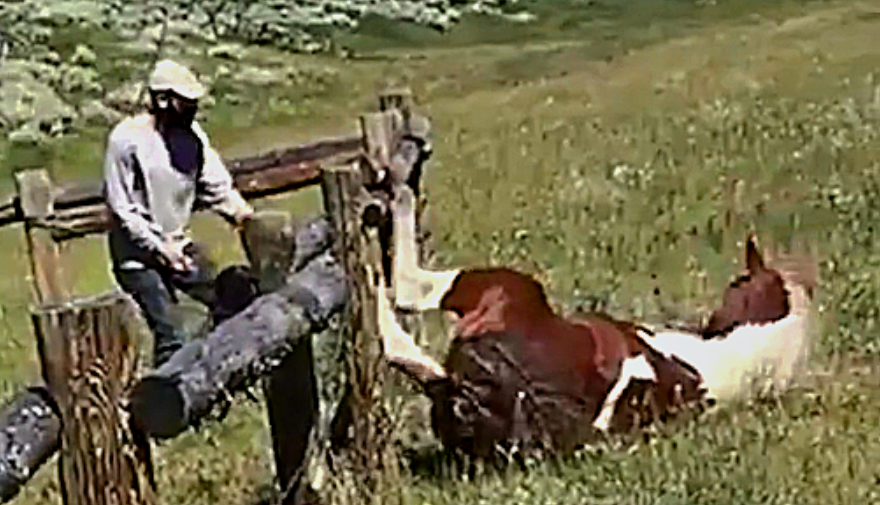 There’s nothing more heartwarming than starting the day by hearing the exciting news that a wild horse was rescued by two brave humans, who did everything they could to help the struggling animal. The video was recorded in Green Mountain, Wyoming and it shows a horse who had been stuck at the fence for too long and eventually got tired, so he wasn’t striving to free himself anymore.

Luckily for him, two men went there to help the horse, and finally, they were able to cut the barbed wire and save the horse. As soon as the horse got free he was very scared and tried to run away but he fell quickly. That’s because he had hurt his leg previously due to the accident with the fence.

But one of the guys was so kind and he comforted the horse throughout the whole time, managed to calm him down, and gained his confidence. It seemed like one back leg was more hurt than the other. So, they thought it was a good idea to tie a cord around the horse’s back legs and dragged it over with a 4-wheeler and get the horse on his powerful side to get up and move.

Their idea turned out to be very successful, the horse got up, attempted to run away but his legs were still shaky. He stood there for a moment, got up, looked at the men who rescued him, and walked away. Don’t miss watching the lovely video in the video below!