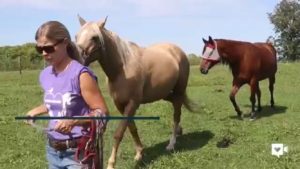 Being born with a disability is not the easiest thing in the world. It is way more difficult for these people to follow their passions and live a normal life, it takes a lot of courage and optimism that a lot of these people have found and have managed to live their lives in a way that they forget about the disabilities that they were born with. It is the same thing with animals as well. Even those who have struggled with different disabilities have managed to push through and have become inspirational examples even for a lot of humans out there. 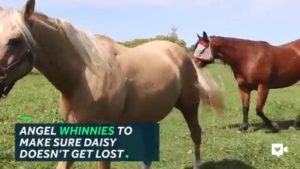 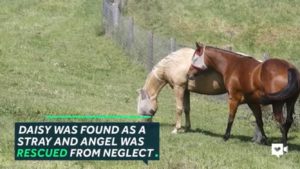 This one right here in the video below is definitely one of the most inspiring horses. Life for an animal in the wild isn’t always easy. There’s no telling what can happen from day to day, and conditions can get unexpectedly dangerous on the turn of a dime. And that’s even truer when the stray animal is trying to get by with a serious disability disrupting its life. This is something that Daisy, a blind horse who was living completely on her own, dealt with every day until help finally found her.

Thankfully, Daisy was rescued and brought to a place where she would be taken care of with her lack of vision in mind. In the midst of all this change, Daisy was able to make a new best friend. Daisy’s buddy is appropriately named Angel. Angel had also been rescued, but unlike Daisy, she had been neglected rather than having been a stray. Angel also doesn’t suffer from any disabilities as Daisy does.

But these differences didn’t stop Angel from stepping in and making a huge impact on Daisy’s life. Angel has taken on the role of Daisy’s guide animal and whinnies as a way of pointing her friend in the right direction. And kind-hearted Angel doesn’t even mind when Daisy accidentally bumps into her from time to time. It’s a truly adorable friendship that is now facing separation through adoption.

Rescuers are just hoping to find someone who is able to take in both horses so that they can stay together. Daisy is definitely a strong animal and I couldn’t actually be prouder of how far she’s come; Angel deserves the appropriate credits as well for being an amazing guide animal. She is definitely a gem in the horse world and she deserves all the best possible.