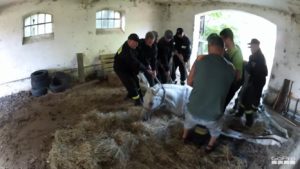 The story below is one of the most emotional stories that I have come across. It is proof of an amazing bond between the horse and the owner. Sometimes we speak highly of the horse owner relationship and fail to demonstrate how much do the horse owners actually love their horses and vice versa and what are they capable of doing for each other. I am pretty sure to have found the right video to demonstrate such a connection and I am pretty glad about it. Marek Slodkowski walked into his barn one day and discovered the unthinkable. 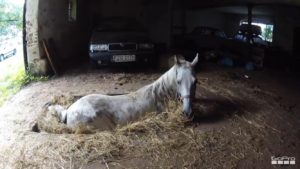 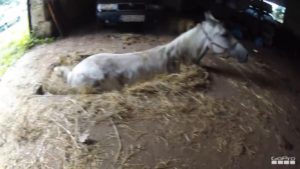 His horse named Freedom had fallen into a maintenance pit. Slodkowski had been raising horses on his pasture for 13 years but never had he experienced anything like this. First, Slodkowski began to stuff the pit with hay. He hoped enough of it would give her the height to push herself out. That didn’t work. Then he called the fire department. The workers came out in droves.

They tried using a rope to lift Freedom out, but they weren’t strong enough. Slodkowski was devastated. Hour after hour, Freedom became more and more exhausted. “Don’t die. Don’t die,” he whispered to her, as he stroked her mane. Freedom looked like she was drifting off, tired of fighting. The firemen tried and tried again to save the horse. They were out of ideas, and all Slodkowski could do was comfort his baby.

“It will be OK,” he whispered to her. “It will be OK,” he said stroking her head, as she lay lifelessly. Then something amazing happened. It was like Freedom had been struck with an idea on her own. Freedom got back up on her feet after hours of being unable to stand. She began to use her front legs to pull herself and her hind legs to push up. Then firemen saw what she was doing and worked with her.

Using a rope they scooted her behind, giving her the push she needed to hop up. Slodkowski was stunned, telling the veterinarian that he really thought “This is it, she’s going to die.” With the love of her human, Freedom was able to save herself. This is indeed an amazing story. I am really inspired by this amazing owner and horse and I wish nothing but the best for them