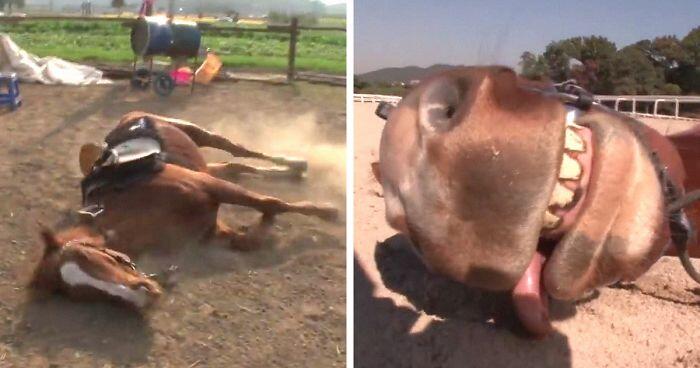 Below you are going to see a horse who deserves an Oscar for his performance and could easily win the title as the greatest actor of his era. Every time someone tries to ride him he drops to the floor and pretends to be dead. His name is Jingang and it is safe to say that he doesn’t like to be ridden.

This lazy horse has mastered the death trick so well that he even closes his eyes, loosens his tongue and puts his hooves in particular positions to make it look like he really is dying. His owners say that he does this trick whenever someone gets onto the saddle and goes near him. They tried to trick him by dropping carrots next to him but even this attempt turned out to be a failure.

The moment anyone starts approaching to get on him again he crumbles on the ground but as soon as people go he climbs back on his feet as nothing has happened. As we can see when everything was quiet he looked around and decided to stand up because he didn’t want to miss the opportunity to eat the delicious carrots.

This would be a perfect solution even for us humans, who sometimes lack the desire to do even the simplest tasks like getting up for work or school. If only we could act the same way this horse does. Life can be very easy and fun when you’re a smart horse just like Jingang!