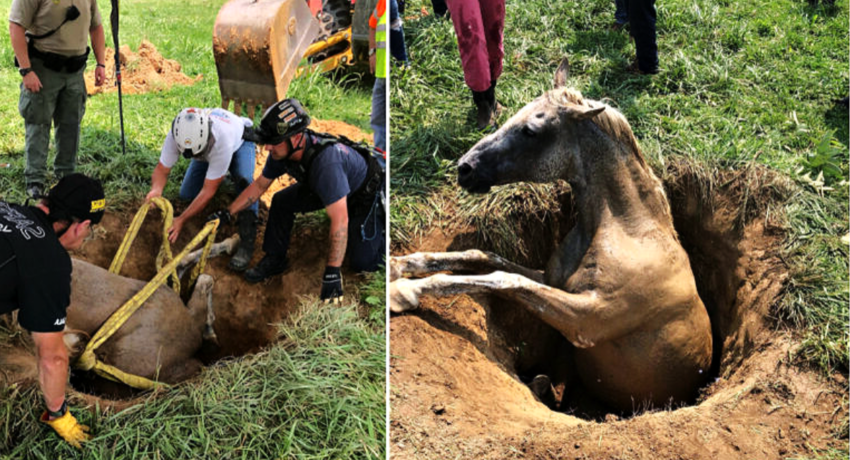 The horse, who was about 8 years old, was in a difficult situation. He had been contentedly grazing in the sunny field in Botetourt County for a long time when, due to a slip, he fell into a little sinkhole that had developed in the pasture.

At this point, he was helpless and seated on his backside. Fortunately, Botetourt County emergency personnel were prepared for this. According to Jason Ferguson, the fire and EMS chief for Botetourt County, it occurs roughly every six to nine months. Large animal calls are not unusual for the rural county.

First responders and animal control have the necessary tools and training for the job. The horse was calmed down by sedation administered by a veterinarian. To help calm his anxiety, a mask was also placed over his eyes.

The horse was then lifted out of the sinkhole by crews after being fitted with a special harness. He was finally rescued after nearly two hours. As soon as he recovered his composure, he was helped to his feet and given food and a cool place to sit under a tent. He had no obvious indications of a serious injury.

Ferguson added, “He was lucky,” adding that the horse now appeared to be free to return to “eating hay and enjoying life” after a stressful afternoon. “Thank goodness, we had the knowledge and personnel to handle it. It’s a collaboration, Ferguson continued. Volunteer fire companies from Eagle Rock, Fincastle, and Troutville contributed to the response to the incident in addition to animal control, county fire, and EMS.