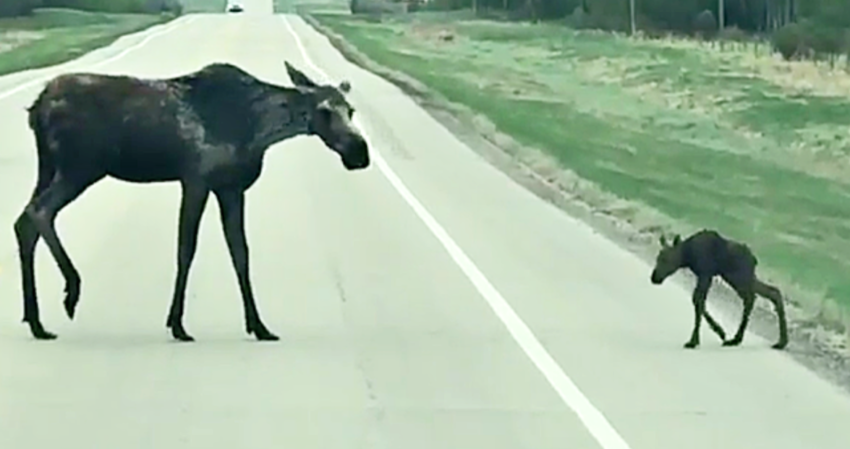 Steve Muise, who lives in Alberta, Canada, is used to seeing a lot of deer and fawns in the forest, but this week he stumbled across a mother and child combination, which moved him even more. A mother moose and her young calf were standing by the side of the road while Muise and his wife, Lalaine, were returning from a trip to Edmonton.

The young child’s adorableness caused them to pause. The little calf, who was still shivering and had wet fur, carefully followed his mother across the street. Simply standing there and taking in the scene, the muises waved down approaching vehicles to allow the animals some room.

According to Steve Muise of The Dodo, few people have ever seen calves this young. “I believe it was born only a short while ago.” Muise was reminded of the value of the mother-child relationship while she was driving home when the new small family moved to the opposite side of the street.

Muise is pleased that he will always be able to remember the nice experience because the video of the beautiful meeting has been viewed thousands of times since he posted it online. Nothing beats seeing a close-knit family; after all, this is the time of year when babies are born.

My students were mesmerised by the clip, driving instructor Muise said of the footage. It’s one of the most incredible things I’ve ever seen. Have a look at the following adorable video for more, let us know your thoughts on the video and do not forget to spread out the video on social media with your friends and family in order to make their day beautiful as well.