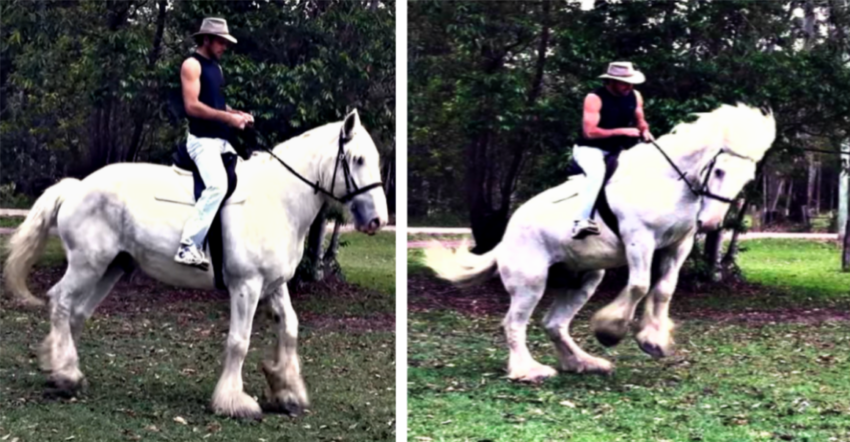 Draft horses are known for being some of the most gentle and calming horses in the world, that’s why we were surprised when we watched this unusual video of a draft horse who was bucked off and thrown his rider from the saddle. Mark, the rider starring in this video, is a great equestrian and during the time the video was shoot, he had just gotten a new gorgeous draft horse.

As you can see, he is trying to ride his new horse and show him all his love, but the spooky horse simply isn’t feeling it. His horse bucked off and throw Mark from the saddle without thinking it twice. As we said, we think that something was wrong and the horses’ reaction happened for a reason.

He looks nervous and if you look closely you will notice that the horse’s lips are stretched. Mark is dragging on the horse’s mouth and the reins are in a straight line, causing constant pressure on the horses’ mouth. Maybe the whole saddle fit wasn’t adapt for him and it caused the horse to misbehave in this particular way.

The poor horse could not bear the pain anymore and this is his instinctive reaction. He was actually giving that rider signs that he felt threatened or scared because his ears were pinned and its tail was really active. When a horse bucks, he most likely will give some signals previously. It is up to the rider to identify these signals so he can prevent the bucking. Have a look at the video below for more and let us know your thoughts on the video!