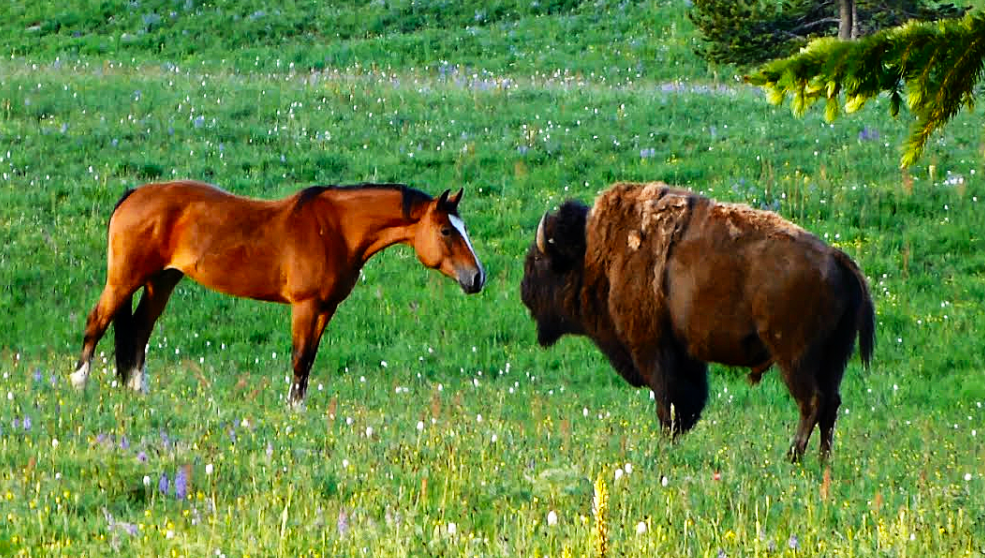 It goes the same for other animals as well, we tend to oversimplify their personality complexity. Also, what might seem even stranger to us are two different animals that go along really well with each other. On the internet, we have seen some indeed weird combinations that we would never expect. After all, this is what the horse world is all about, these beautiful everlasting friendships and I am definitely here for them. I mean, would you ever expect to see a camel and a horse being very close friends?

The friendship that we are going to talk about is not quite a friendship but it potentially might be in the future. In the video footage beneath this text, you’ll see a scene that was recorded recently on a 6-day horse pack trip through Yellowstone. Clearly, both the horse and bull were in a good mood because as you can see neither of them seemed to show aggressive behavior. However, the horse community is not very accepting, despite the fact the bison identifies itself as a horse.

Unfortunately, the poor bison ended up being among horses while he was trying to find its herd, and those horses refused to accept him. I would feel really bad if I was in the bison’s place, on the other hand, you can’t blame the horses because they are not familiar with the bison and it looks like they just want to protect themselves from him. Well, someone better makes them understand that the bison is not a threat, it really looks like this can go into a very beautiful friendship. Please have a look at the video below and let us know what you think!