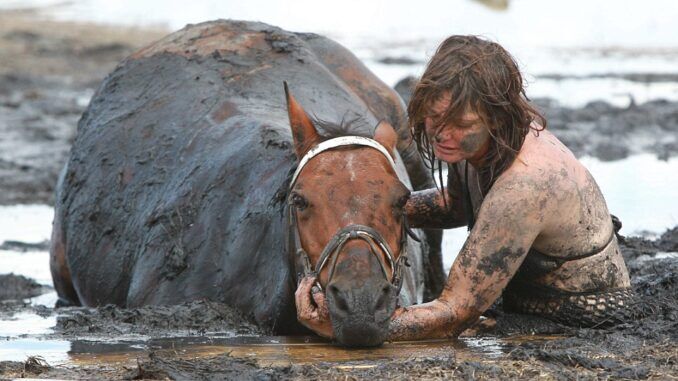 The video below is another great testimony of how strong is the connection between horses and owners. We get to be more appreciative of the things we have when we are close to losing them. It is very shocking how strong we become in these horrible moments. We bring out the fighters inside us, we try to do what is possible to overcome the difficult situations we are facing.

The video below is a testimony of what I have just said. For Nicole Graham and her daughter Paris, an afternoon horseback ride on Australia’s Geelong Beach turned into a total nightmare when they encountered some mud that was way deeper than it appeared. While Nicole was able to help Paris’ horse get out ok, her own horse, Astro, kept sinking and it was completely in control of Mother Nature.

Nicole was a wreck for her beloved friend of 18 years and Astro was equally terrified, as the tide was quickly rising. Every attempt Astro made to wiggle out just forced the horse deeper into the mud. There was nothing Nicole could do but keep the horse’s head above water until rescuers arrived to help.

The entire ordeal took more than three hours, which feels like forever when someone you love is in trouble. Luckily, some helpful heroes were able to free the dehydrated and exhausted mare just before it was too late. This was a very difficult rescue, but it was partially the love and strength Nicole had at that moment that kept her horse alive.