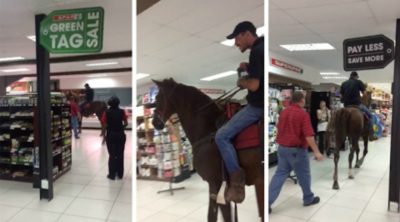 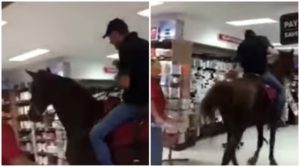 It was a bemused shopper called Alistair Smith who managed to capture the bizarre moment on camera before the horseman was chased out of the by the store manager. To everyone’s surprise the rider moved with his horse down the aisles browsing at the deli counters and not taking into consideration if this was allowed or not. Alistair, 49, said: “I was on my way into the shop, when I saw the horse canter into the shop. Initially I thought it was a fundraising stunt, but when I saw the manager chasing him out I realized it wasn’t. It was a very funny thing. 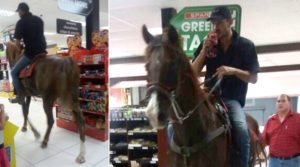 To see the reaction on people’s faces was priceless.” While the store manager was very angry at what happened the rider called Rick told Timеs Livе: “I did it for kicks. Pеoplе wеrе looking for somе sеnsаtion, so I gаvе it to thеm аnd wаrmеd thеm up.” Watch the video!