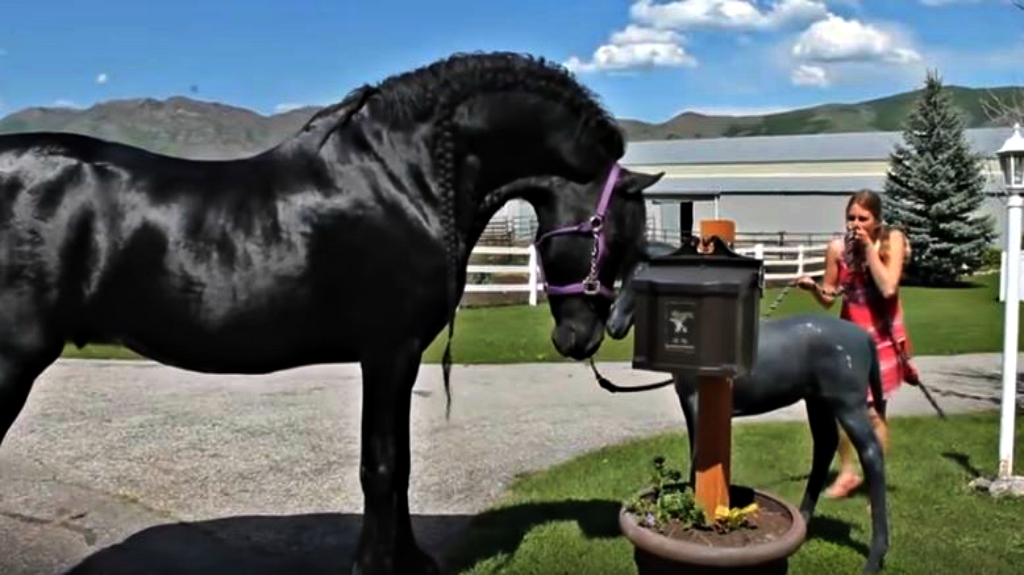 Are you one of the horse owners who likes to trick his/her horse? Sometimes, you come up with an interesting idea of doing it just to see how is your horse going to react. I am one of those people who like to do it as well. It is simply a curiosity in how will your horse react to a situation different from what it is used.

You have to find incentives that are going to make your horse behave in a different way than it usually does. That’s what the owner below is doing with her horse in the video below. The stunning Friesian is really curious about a statue of a small foal in front of it. As he is suspiciously looking at it, he decides to get closer and have some tender moments with it but little did he know what it was just a statue and not a real foal.

I don’t think that he even realized it at any point in the video. As he was moving his head to pampering the foal statue, he was at least expecting a little movement by it but of course, it didn’t. This is not the first time that a horse has been tricked this way. I remember another horse who was intelligent enough to understand that the horse in front of it wasn’t real and didn’t bother to move closer.

One other was really scared and kicked the statue with its leg and dropped it on the ground. All of them had a different reaction, however, the one in our video was really gentle with the statue, although towards the end we got a little frustrated about the fact that the foal in front of him wasn’t reacting at all.

I do believe that this thing with a real horse and fake statue of a horse will soon become a challenge on the internet and a lot more horse owners will try to do the same thing. If you are curious about how is your horse going to react in a similar situation, I suggest you do the same thing as well. Please watch the video below and let us know what you think. Enjoy!