Every person in the world listens to a variety of musical genres to whom he/she is more attached to. We are all different and I bet there can’t be found two people with the same taste of music. Music is a way of healing for a lot of people and listening to it brings nothing bad. Not only us, but apparently horses are great music fans as well and again, with different tastes.

We have seen horses who like rock music, we have also seen other more appreciative of pop music and then we have this horse who loves a classic. Get ready to fall in love with “You Raise Me Up” all over again in a beautiful new way. Many of us are familiar with “You Raise Me Up,” which was most popularly performed by artist Josh Groban. 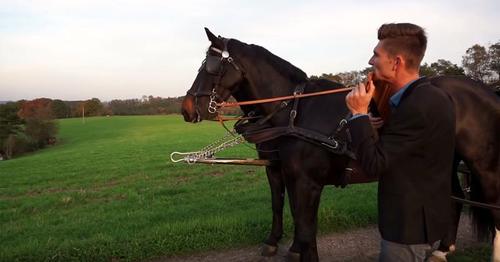 However, the song originally was an instrumental tune called “Silent Story” – and that’s exactly what David Doring’s rendition is, all with a pan flute. David is a musician known worldwide for his incredible talents playing the pan flute. Although it’s not something we typically see in modern music, it is considered a popular folk instrument. It consists of various sized pipes in a row, each creating a different hypnotic sound when blown into.

From the moment David begins playing “You Raise Me Up” on his wooden instrument he quickly draws you in. Not only with the chilling notes of the song, but also with the beauty of his video. As you can see, this horse likes listening to the sound of this music as well. Get ready to fall in love with this version and see how relaxed these horses are listening to it.