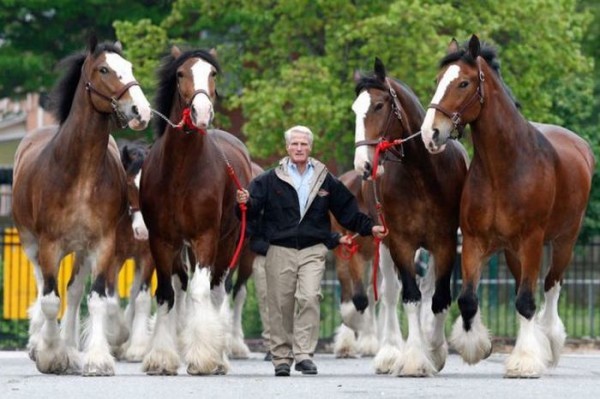 The Clydesdale horse is one of the most popular breeds all over the world due to his beauty, gentle and peaceful nature. They are large, powerful and noble draft horses that were first descended from draught horses in the province of Clydesdale in Scotland. They were considered very endangered but due to all the efforts that were made to save this amazing breed, today Clydesdale horses are no longer endangered and can be clearly found in the United States, Canada, Great Britain, and Australia. It’s very easy to recognize this horse breed due to their large stature and feathers around their hooves. Today we have decided to show some of the most interesting facts about Clydesdale horse so you can get to know this breed more. Keep reading! 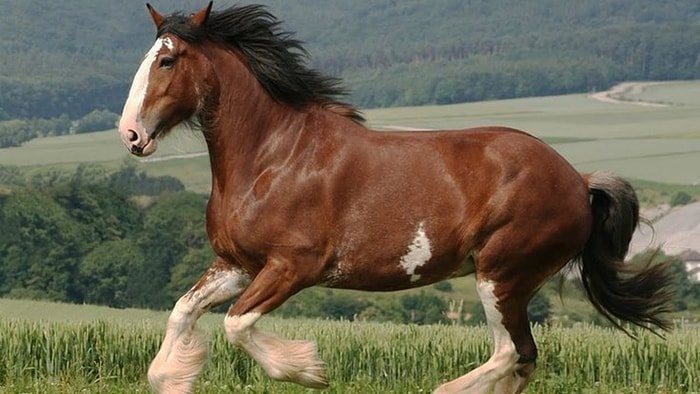 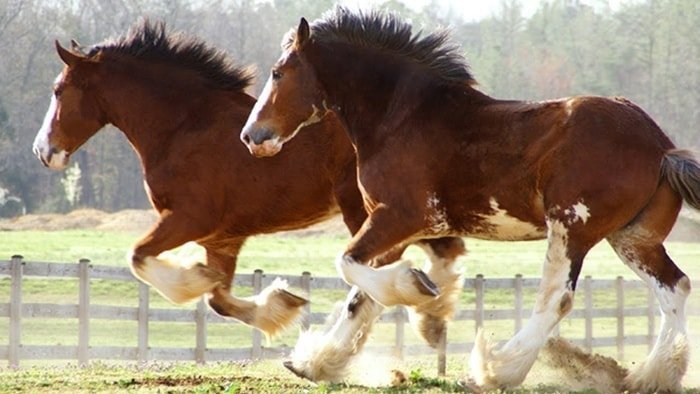 1. Clydesdale horses are one of the biggest breeds in the world.

The common height of a Clydesdale will usually top 18 hands in height. Some of them are more than 6 feet in length. This means that the Clydesdale horses will most likely weigh more than 1 ton.

2. One of the biggest horses in the world is a Clydesdale.

A giant Clydesdale horse named Poe located in Ontario, Canada is one of the biggest horses in the world, who stands at 20.2 hands in height. He measures in at a majestic 3,000 pounds. He is just 0.3 hands off of the horse who holds the world record as the tallest living horse.

3. Clydesdales have the most powerful heredity for feathering.

“Feathering” is the hair surrounding the hooves and ankles of the horse. Ever since this breed was developed, it has always had the featherings. It is assumed that this feature was generated or grown naturally in order for the horse to endure with the freezing winter temperatures of Scotland. The power of the feathering heredity is also used by other breeds, such as the Shires horses, to develop the feathering in their own breed patterns.

4. It is very easy to own a Clydesdale today.

For anyone who is interested to buy a Clydesdale horse, thanks to several websites they can easily do so even over the internet. A lot of listings are currently available, most of them priced at $10,000. There are also cheaper Clydesdale horses but keep in mind that although that primary cost might seem alluring, you have to know that the normal Clydesdale is going to spend up to double the quantity of feed every day opposed to other breeds.

5. The Clydesdale was once a popular warhorse.

When warfare included using Calvary and horses as an asset, this breed of horse was one of the most widespread because of its mass and size. It also has an amazing calm nature, which meant that it could go into different circumstances without getting spooked. This is why they are still such a loving and well-behaved horse, despite its huge size.

6. Clydesdales were once endangered.

7. Clydesdales as a breed are likely to injuries and other dermatitis concerns like rain rot.

This is because of the depth of their hair and the nature of their feathers. If a Clydesdale is let out into wet or swampy conditions and their legs are not provided to properly dry, then mild to critical injuries can happen often. Rain rot also favors occurring more often with this breed.

One Clydesdale horse can pull up to 8,000 pounds in a short time. They can also pull a vehicle that may weigh 200-400 pounds for several hours per day. Even though they don’t have any pulling records, their pulling power is still one of the most powerful ever measured.

Clydesdales perform both well in hitch classes and halter classes. Due to their patient and responsible nature, they also make excellent therapy horses. They also perform great in showjumping and dressage.

10. Even Clydesdale foals are considerably heavy.

An infant Clydesdale foal can weigh up to 180 pounds and still be viewed as a “normal” foal. To maintain such a large baby, a mare should produce up to 100 pounds of milk daily.